Kissa Carla Ka ..."Carla Bruni, you are most welcome to come to India with your man" 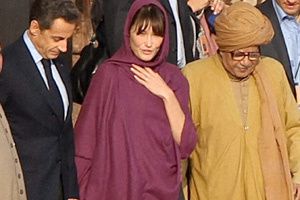